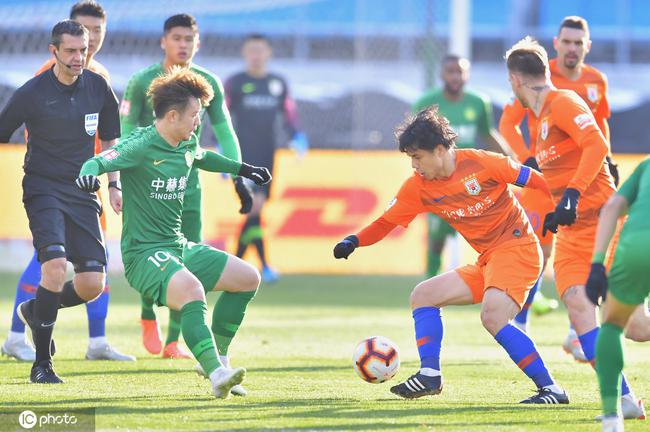 The 15th round of the Chinese Super League reignited this weekend. On October 12, the Beijing Winter Olympics documentary channel "Football 100 Points" program, former Guoan players Xu Liang and Wang Changqing served as guests, and the host Wei Yidong together mainly looked forward to the second Stage Guoan vs. Luneng duel.

Before the start of the second stage, Shandong Luneng experienced a coaching change. Hao Wei replaced Li Xiaopeng as Luneng’s coach. Xu Liang believed that there would be two difficulties for Guoan’s game. “One is Augusto’s injury, and the other is Hao Wei. Wei’s style of play. Now Hao Wei is leading the team. We can only look at his style from the team he has led, and we can’t completely believe that he will follow this style. He will definitely adjust, but how? We don’t know how to make adjustments. It’s harder for us. Hao Wei led the Olympics to play defensive counterattacks, but it is not the same as Li Xiaopeng’s guidance, so I don’t know what the opponent will do before the game."

Regarding the change of Luneng’s commanding position, Wang Changqing believes that there are advantages and disadvantages for Guoan. "Hao Wei, as Li Xiaopeng’s first assistant coach, should be the most diligent in hiring and communicating each game. Why did Hao Wei be allowed to catch the ball? The team, it shows that he is the most familiar with the team. He may be more exposed to advanced training concepts than Li Xiaopeng, and may be more instructive than Li Xiaopeng on the spot. For Guoan, the advantages should outweigh the disadvantages, including after the Luneng club’s equity change. , The players want to try their best to show their value, every player wants to show their good state before the new coach."

Then the topic talked about Luneng’s new coach Hao Wei. Wang Changqing said that he and Hao Wei are very familiar. “We used to live in a house, and he came to Beijing to gather together. This time he took over the team, we also contacted privately, but too many It’s inconvenient to ask. As every coach is under pressure, he is the same, but Hao Wei is very mature. Both EQ and business are very easy to learn. At the beginning, he dared to take over the Olympic Games, although he had regrets. There are also some unwillingnesses. Including this time he also talked about the very low posture against Guoan, thinking that Guoan's strength is higher than Luneng, but he also said that everything can happen in the knockout matches, and the on-the-spot change is the decision to advance."

Subsequently, Xu Liang said that he did not know Hao Wei, but based on his understanding of Hao Wei, there will be two points on both sides: “One is that Guoan’s possession rate is higher than that of Luneng, and the other is that Shandong will definitely shrink to midfield. Defensively, it is impossible to face Guo'an to do high-pressure defense. You must return to your own second half to defend. This is certain."

Talking about the past record of Guoan and Luneng's clashes, why Guoan has struggled with Luneng, Xu Liang first joked that he was not on the court, and then he said:

Before Guoan's re-entry in the competition area, Guoan Club held a ceremony. When talking about the players expected in the next stage, Xu Liang said frankly that it must be Bakambu. Xizhe is great, so you have to give it to him at the end, so just follow the current momentum, don’t lose the chain at the critical moment, and strive to get the Sagittarius king at last.” Xu Liang also expressed the importance of Zhang Xizhe, “Zhang Xizhe, Augusto and Vieira, these three people are indispensable, if I have to lose one I would rather lose Vieira, Zhang Xizhe's overall view, and Augusto connection is essential. "

Predicting other competitions, Xu Liang believes that "Shanghai Derby" Shenhua can win, "I have played there, and I understand it better. The bottom line is there. Shenhua has never lost when I was there. It has better ability than Shanghai SIPG. It is inferior.” Wang Changqing added: “Shenhua’s final fourth gold content is higher than ours, and the posture is lower. Fight with you. The more this mentality is in the knockout, the more likely it is.”

Looking forward to the schedule of the Guoan AFC and the Football Association Cup, Wei Yidong mentioned the conflict of the schedule. The guests agreed that if the choice is made, the AFC will be selected. Xu Liang said bluntly: "Playing the AFC well, the things learned on the court are different. The experience is different." Wang Changqing said: "Although you are Beijing Guoan, you represent China."